Book of Mormon Geography in Neville-Nevilleland

The contents of all BMAF publications are the sole responsibility of the individual authors and therefore do not necessarily represent the views of BMAF or The Church of Jesus Christ of Latter-day Saints.

Book of Mormon Geography in Neville-Nevilleland

Jonathan Neville is an advocate of the Book of Mormon Heartland Model who has been generating an endless array of polemical posts against Mesoamericanists, including me, on two different blogs. Like other Heartlanders, he has adopted an unfortunate mode of discourse that blames Mesoamericanists for damaging faith and even misleading the Church. Also like most Heartlanders, he has never produced a detailed study of Book of Mormon geography. Despite that, he has confidently asserted,

It turns out that if you put Cumorah in New York and Zarahemla in Iowa, the geographical references in the text fit nicely. The archaeology, anthropology, and geology also match up with the seas, the narrow strip of wilderness, going up and down, the narrow neck, etc.

This, however, has never once been demonstrated. Brant Gardner has recently critiqued the general Heartland Model based on specific textual details. In his so-called “peer review,” Neville repeatedly accuses Gardner of engaging in straw man argumentation. Such an accusation would have more teeth, however, if Neville would offer at least some kind of analysis of the textual details and how they might fit with a model based on his two points. But, alas, Neville never does this. If Neville disagrees with the Heartland Model as described by Gardner, then why doesn’t he offer his own description of the Heartland Model? Just how do “the geographical references in the text fit nicely” across the Eastern United States?

John L. Sorenson’s model may be imperfect. It may be laden with assumptions. But in his The Geography of Book of Mormon Events: A Sourcebook, he laid out his thinking on the subject in detail. He provided his interpretation of over seven hundred verses he deemed relevant to the Book of Mormon. Sorenson is the most thorough, but other Mesoamericanists have also given some fairly detailed discussions of at least a few hundred verses. This gives me something I can actually read and critically examine. I can weigh and consider Sorenson’s and other Mesoamericanists’ interpretations. Can Neville, or any other Heartlander, show me where this has been done by an advocate of the Heartland Model? You see, I would love to take the Heartland Model seriously, but they haven’t given me anything to take seriously. This is why Gardner says that the hypothesis (meaning, of course, its advocates) “really doesn’t care much about geography.” And although Neville takes umbrage to this statement, his constant haggling over early Church history statements and serious lack of any detailed analysis of the textual-geographical data really serve to illustrate the point. If he and his associates truly care so much about geography, where can I read his detailed analysis of the 700+ geographic passages?
In rebuffing Gardner, Neville insists that even though geography is the last factor considered by Rod Meldrum and Bruce Porter, “Every analytical method prioritizes steps, but the final step is no less important than the others. This is as true of the Porter/Meldrum approach as any other.” But this does not actually match what Porter and Meldrum actually say. They unambiguously assert that “these prophecies about ‘remnant’ and ‘Gentiles’ upon this land becomes a primary witness and testimony that should supersede any geographical passage in the search for a setting for the Promised Land.”1 Need we review the meaning of the term supersede in light of Neville's assertion?
verb (used with object), superseded, superseding.

From here, I will let the reader decide if Porter and Meldrum seem to weight geographic evidence—their “final step”—as equally as their first priorities.

Amidst all his ranting about straw-man arguments, however, Neville is prone to commit such logical fallacies himself. In a blog post entitled, “Seriously … this is the map you are supposed to accept,” Neville shows the following picture from Brant Gardner’s Traditions of the Fathers.
The red circles were added by Neville to emphasize his point. The sea east and sea west are actually north and south of the narrow neck of land and Zarahemla. Neville then offers an absurd explanation for this problem:

Now, you might wonder why the sea east is north and the sea west is south of the supposedly “narrow” neck of land that is 125 miles wide. The answer is that Joseph Smith didn't understand Mayan mythology so he didn't know how to translate the book correctly. Well, that's not fair. When he translated 1 Nephi, Joseph translated directions accurately because when Nephi lived in the Middle-East, he used the same cardinal directions we do today. But when he came to the New World, Nephi and his successors immediately rejected the Hebrew customs and embraced Mayan mythology and worldview.

As far as straw men go, this is the weakest kind. Where to even start?

I could go on. I recommend one read the detailed analysis of Book of Mormon and Mesoamerican directions from Gardner himself to get an accurate view.

In a rather backhanded compliment, Neville remarks, “I admire the creativity of the Mesoamericanists.” Frankly, the creativity of Heartlanders is far more impressive. I mean, they seriously want you to believe this map: 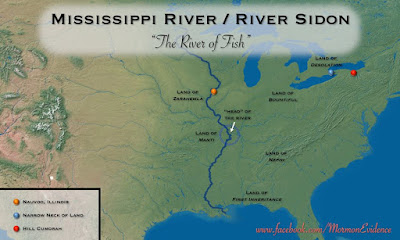 Or this slightly different version: 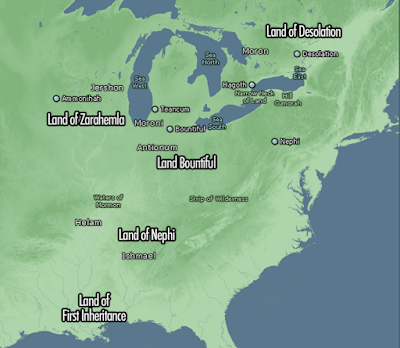 Whatever shortcomings a Mesoamerican Model might have in terms of placement of seas, these pale in comparison with the placement of the seas in Heartland Models, which are impossible to square with the text.
Take, for example, the story of the two thousand stripling warriors, which I have been studying of late. Their story takes place “in the borders of the land on the south by the west sea” (Alma 53:22). This is, of course, the land of Zarahemla (see v. 12), but just in case there is any doubt that they are stationed south of Zarahemla, note that their adventures include Manti (Alma 56:14; 57:22; 58:1, 13, 25–28, 39), the head of Sidon (Alma 56:25), along with a city by the seashore (Alma 56:31). Please, look at the Heartland maps and tell me, where is the body of water that could plausibly be considered a west sea in the vicinity of Manti, the head of Sidon, south of the land of Zarahemla? How can these stories play out in the Heartland, which places all the seas, including the west sea, (north)east of Zarahemla, and nowhere near Manti? (This is an episode that plays out very well in most Mesoamerican geographies, mind you, especially Sorenson’s.)
Perhaps Neville would be inclined to explain some details of his own Heartland geography model (presuming they differ substantially from those shown above) and how these stories about Helaman’s army play out in them, so I can critically examine such a hypothesis. I would love to see just  how “creative” Neville has to get to make this fit.
The fact is, no matter how many times Neville wants to simply assert that the Heartland fits better geographically, etc., until he can show how stories like this actually do fit better geographically, the assertions are meaningless.
Beyond all that, in his outrage at the idea that Lehi and co. would adopt native ways of conceptualizing the world, there seems to be an utter naïveté about basic anthropology. Lehi and his family were a small group of immigrants. Their survival in a totally new environment depended on adopting local ways and customs, and not just in terms of growing crops or building shelter. Being able to communicate with locals would be essential, and adopting—to at least some degree—the predominant worldview, would be a necessary part of that. All of this is true no matter where Lehi landed, whether in Mesoamerica, North America, South America, or anywhere else on the planet.
Underneath all of this there also seems to be some sort of assumption that adopting the native ways (in this case, Mayan) of conceptualizing directions and the world around them is wrong. The Israelites believed that the world was flat and that the sky was a solid dome that held the celestial waters at bay—a worldview largely held, and likely adopted from, the wider ancient Near Eastern world. And this erroneous view of the cosmos is reflected in several places in the Bible.  So what, then, is so objectionable with the idea that the Nephites understood directions in a way that was similar to that of their neighbors, or if the northern and southern seas mentioned only once in the text (Helaman 3:8) are merely metaphorical based the cultural worldview at the time (another idea Neville does not seem to like, despite having no real argument against)? Seriously, does any passage become difficult to interpret if those seas are just metaphors? Because reading it as literal certainly creates difficulties for any geography, including Heartland-based models. What is actually wrong with these ideas?
We cannot read the Book of Mormon like it is some kind of fairy tale, where we get to project our modern way of seeing the world onto its various characters. If it is a real history of real ancient peoples, then we should expect those people to think, act, and conceive the world the same way real ancient people did. This means holding world views about the cosmos, or understanding directions, and a variety of other things differently than we do. It also means that we need to be able to do more than simply put the names of Book of Mormon cities, rivers, and seas on a map willy-nilly—the stories and events that tell us about those places need to fit a real-world location. Otherwise, Zarahemla might as well be in Never-Neverland.
1. Bruce H. Porter and Rod L. Meldrum, Prophecies and Promises: The Book of Mormon & the United States of America (Mendon, New York: Digital Legend, 2009), 17; emphasis added.
Rappleye, Neal
Topic/Type:
The Mesoamerican Model
Cultural Considerations
Book of Mormon Names and Places
The Great Lakes"Heartland" Model